Are You Hearing Your MIL or DIL, or Are You Listening? 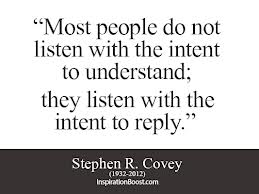 I was at an event the other day and while I was there I started observing how other women interacted with one another. I was fascinated by what seemed like a power struggle between the different women. It wasn’t because they were arguing; it was a normal conversation. What I noticed, however, was that both women were fighting to be heard. Both women wanted the other one to listen to her so much that she herself wasn’t listening.

How often do you find this to be the case in your relationships? Whether it’s a friend, family member, or an acquaintance, it seems as though everyone is talking and no one is listening. I will say the degree to which this happens seems to be based on how much each person matters to the other.

When I think of the MIL/DIL relationship it is astounding how hard it is to listen to the other because so much seems to be at stake. Instead of listening we hear something they say and we immediately stop listening and start formulating what we want to say in return. And now…we are no longer able to hear a thing that they are saying. To make it worse, our in-law is doing the exact same thing. As you can imagine – no one is listening!

Part of the reason for this is we want to make sure she understands why she is wrong or why she has misunderstood. We want to be heard! As I say in the Listening & Learning download for MILs and DILs, if you want to be heard, you have to first listen.

You will get a chance to be heard (really, you will) if your in-law feels you’ve heard her. Take the risk. What do you have to lose? The more you listen to her, the less she will feel the strong urge to bulldoze her thoughts, feelings and opinions onto you. This then opens up the door for you to be heard as well.

Now you might say, “She will never listen to me, it’s always about her.” Yes, that is how it feels, and yes, that may be what it looks like, but she is probably thinking the same thing. That is why it is time to do something different…changes won’t occur magically, but change will occur when you take that first step.

Someone has to start doing things differently to create a different outcome. Let it be you!