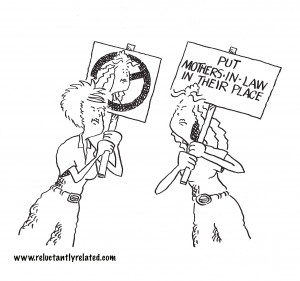 Sunday (September 7) was National Grandparent Day! I know many of you (if not all) are thinking, I have never heard of Grandparent Day. Who even knows about this holiday? I have to admit it is not a day that is really celebrated by anyone I know, and when I mentioned it to people in passing they have seemed pretty ho-hum about it. However, as I thought about Grandparent Day, it led me to think, again, about the mother-in-law/daughter-in-law relationship (As if I need another reason to think about this relationship, right?)

When a mother-in-law and daughter-in-law don’t get along:

No matter what the issues may be between the mother-in-law and daughter-in-law everyone in the family knows about them. Unfortunately each member of the family comes into the situation from their own perspective – meaning their own personal history and emotional baggage – and as a result it is difficult for any one of them to remain neutral. These other in-law relationships become colored by what the mother-in-law and the daughter-in-law do and say, which then keeps the whole “family pot” stirred.

2. Take a step back, take a deep breath, and look at the bigger picture.

3. Ask yourself – “Is this really how I want things to be in my family? Do I really want my family to see me in this light” (which is typically either as the villain or the victim?)

4. What can I do to start to make things better – for me, my in-law, and the rest of the family?

No one wants to believe they are directly or indirectly hurting other people, particularly people they care about. Unfortunately that is exactly what you are doing. As unintentional as it may be, you do end up hurting the other people in your family who love you. Give it some thought. Whether you feel it is your mother-in-law or your daughter-in-law who is really causing the problems, you have the power to turn things around.

If you would like some help figuring out what you can do to make this relationship better, please email me Deanna@DrDeannaBrann.com